You are here: Home › Uncategorized › Watch The World’s Largest 3D Printer In Action
By Dri-Air Industries on December 3, 2019 in Uncategorized 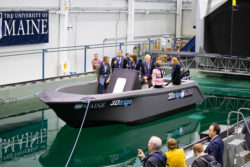 3D printing has increased in popularity over the last few years. These printers have been used in a wide variety of environments, including classrooms, labs, and homes. Many are now looking to 3D printing for industrial purposes, and these kinds of projects require a massive printer and a large amount of resources. One university may be able to provide all the necessary products for large scale 3D printing — The University of Maine — which just unveiled the world’s largest 3D printer.

The material was dried and conveyed to the Ingersoll Machine Tools 3D printer using a Dri-Air drying and conveying system. The Dri-Air system features two drying hoppers for quick material changes.
Ingersoll Machine Tools, Rockford Il, made the 3D printer that is capable of printing objects up to 100-feet long. It can print objects up to 70-feet long in its current state, but a new building will be constructed to house its full configuration. The Guinness Book of World Records attended the unveiling event to confirm the status of this new 3D printer. The university showed off the printer’s capabilities by printing a 25-foot, 5,000-pound patrol boat.
The boat was christened 3Dirigo, in honor of Maine’s state motto. They have also printed a boat mold that can be used by other boat builders. In total, the University earned three world records this week. These were awarded for the largest polymer 3D printer in the world, the largest polymer 3D printed boat in the world, and the largest polymer 3D printed object in the world.
3D printing, or “additive manufacturing”, creates three dimensional objects by adding layers of plastic filaments. The University has developed its own filament from cellulose nanofiber (CNF), or a tree that has essentially been ground down to its nano structure. The CNF is then combined with polylactic acid to create a strong, plastic polymer pellet. This particular 3D printer can consume up to 500 pounds of pellets per hour, and 3Dirigo was printed in just over a weekend’s time.
Continued…
Credit: https://hothardware.com/news/worlds-largest-3d-printer

View all posts by Dri-Air Industries →